TREKKING THROUGH THE HISTORY OF JAVA FIRST POINT

There are many paths that cross the Ujung Kulon Peninsula thick jungle. All paths offers a wilderness sensation of Ujung Kulon National Park. However, the path that starts at Cibom and continues to Tanjung Layar is the only route where we can find the relic of human history in the past. Stories of great dreams, glory, and disaster. 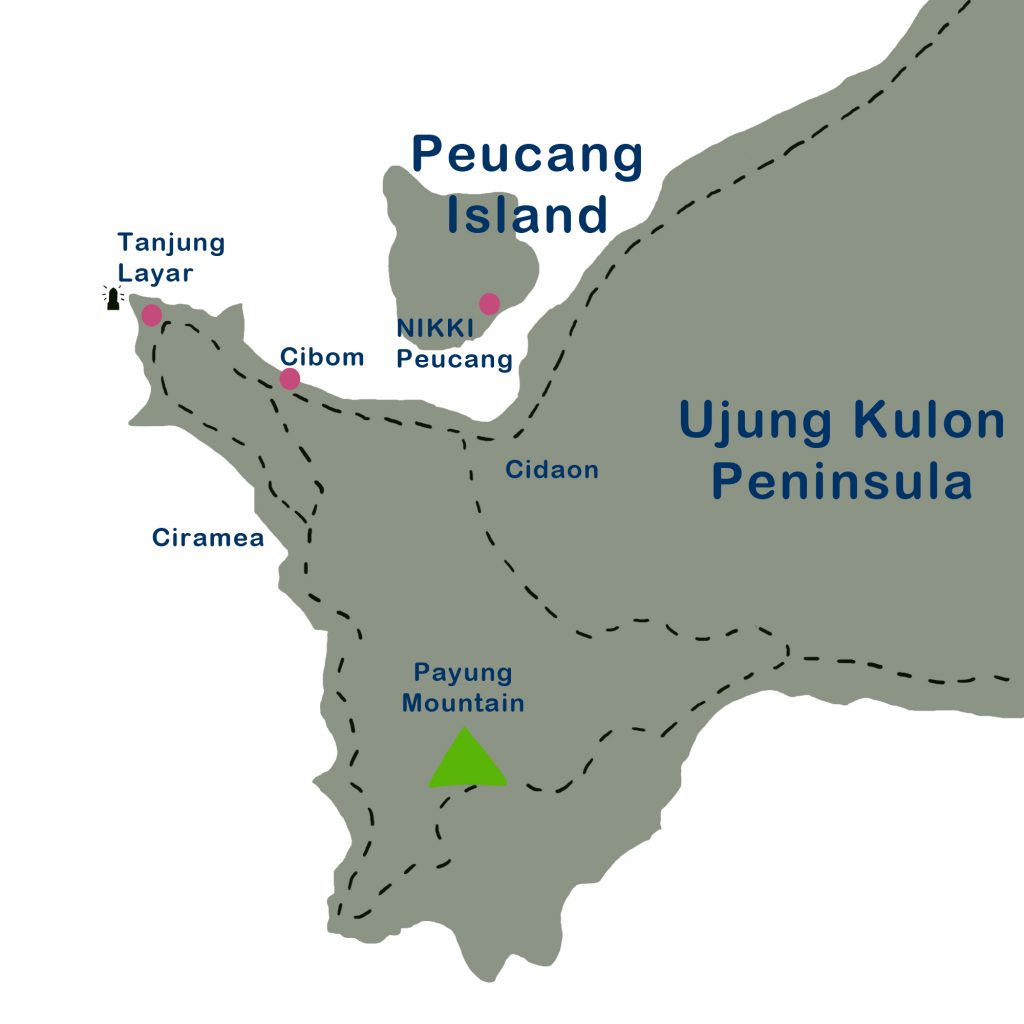 Cibom is located directly opposite Peucang Island. If we come to Cibom with a big boat and don’t bring a raft, then we have to jump and swim to the Cibom coastline. Another way to reach the Cibom coastline without swimming is by taking a small fiber boat belonging to the Ujung Kulon National Park representative office on Peucang Island. This 40 pk engine ship is propped on the pier of Peucang Island. With this boat, from Peucang Island it only takes less than twenty minutes to go to Cibom. We still had to dip a foot in the water a bit and walk to the coastline.

In 1808, Governor General of the East Indies, Herman Willem Daendels, assessed Cibom as a strategic area. The surrounding waters, the Sunda Strait, are very busy with foreign trade ships. He intends to build ports and fortresses at this westernmost part of the Ujung Kulon Peninsula. His dreams never became real. Many workers died when the project began. In The Land of the Last Javan Rhinoceros, Hoogerwerf wrote in quotation marks that Daendels’ workers were reported to have died of poisoning by dangerous vapors coming out of newly cultivated land. The remaining workers run away. Daendels project footprint in the form of iron bars and stairs of brick and cement can be found not far from the Cibom coastline. There was no plan to develop the Cibom area after Daendels. Now Cibom is a small part of Ujung Kulon National Park which is dominated by mangrove and palm trees.

THE VILLAGE THAT WIPED OUT BY WAVES AND REGULATION

The Krakatau eruption in 1883 hit the coastline of Ujung Kulon Peninsula with a height of 15 meters. Hoogerwerf said the waves destroyed Kampung Ujung Kulon, Cikuja, and Rumah Tiga whose locations were thought to be opposite and on Peucang Island. Ujung Kulon village was known as a rubber latex exporter in large quantities at that time.

When the tsunami hit, the majority of the population in the villages located around Cibom managed to escape to the high cliffs at Tanjung Layar. The trail from Cibom – Tanjung Layar stretches flat as far as 1.6 Km. With a leisurely walk, the path takes about 45 minutes. If run, residents can still escape to Tanjung Layar, as the waves roll down from Krakatau to the Ujung Kulon Peninsula in 35 minutes.

Kal, in his book Het Schiereiland Djoengkoeloen (Semenananjung Ujung Kulon), published in 1910, found about 40 resident houses standing along the southern coastline of the Ujung Kulon Peninsula (Cibunar) and Peucang Island, which means include Cibom area. These two small villages were probably established around 1896 after the eruption of Krakatoa. The local government relocated them and the villages that were also likely to stand in Tanjung Telereng, Cigenter, Cibandowo, and Cikarang, before established Ujung Kulon as national Park. The reason is tiger plague. Although, for the Peucang Island Village this reason is irrelevant because there are no tigers on the island. 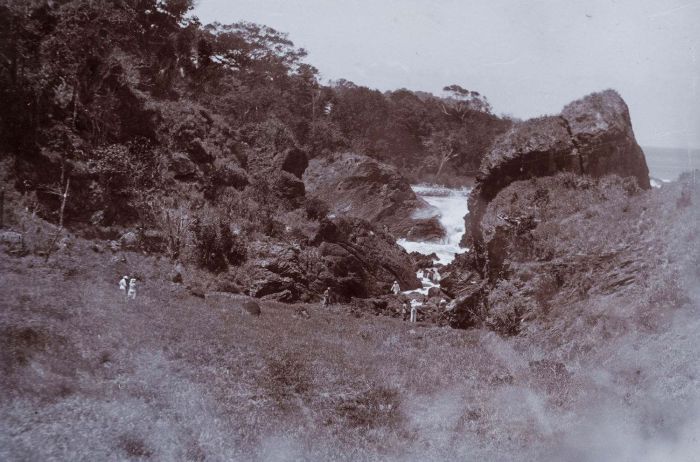 The end of this route is a steep cliff that looks like a big sail (layar) from the sea. So it is called Tanjung Layar. For the ships which coming from the Indian Ocean, the cliff is a sign of the entrance to the Sunda Strait on the east side. So this spot is often called Java Head or Java’s First Point.

The Sunda Strait began to become a busy sea tunnel by international traders in the 16th century. When Malacca fell under Portuguese rule in 1511, Muslim traders such as those from Gujarat began searching for new trade routes to the archipelago. They chose to establish relations with the Muslim Sultanate of Banten rather than with the Portuguese who embraced Christianity. When it came to Indonesia in 1596, the Dutch also avoided the Malacca Strait and chose to enter the archipelago through the Sunda Strait to avoid Portuguese troops. 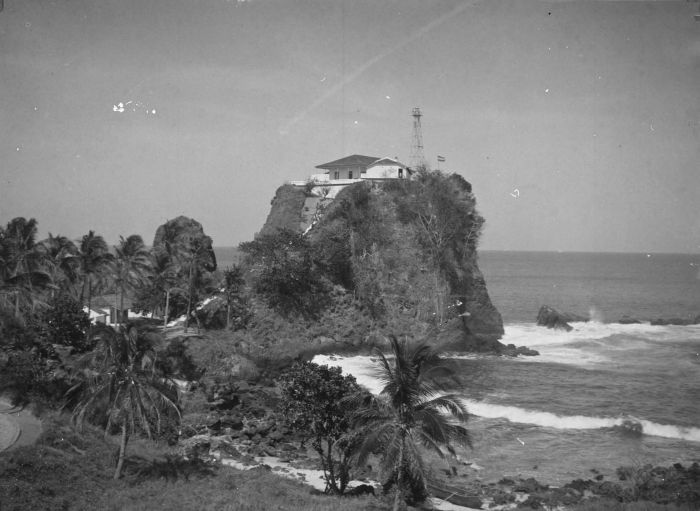 OTHER RELIC AT TANJUNG LAYAR

The Tanjung Layar Lighthouse is currently guarded by officers who are rotated every 4 months. There is nothing around the lighthouse except the jungle. The grave complex near the lighthouse by the ranger is claimed to be the tomb of a sick officer who died at the scene. If they wait for the pickup, it can go for days. The corpse will rot so it has to be buried there. There is a prison complex near the lighthouse. The source of this prison’s function has not yet been found. Reportedly this is a prison for pirates who were captured in the era of the Sultanate of Banten. 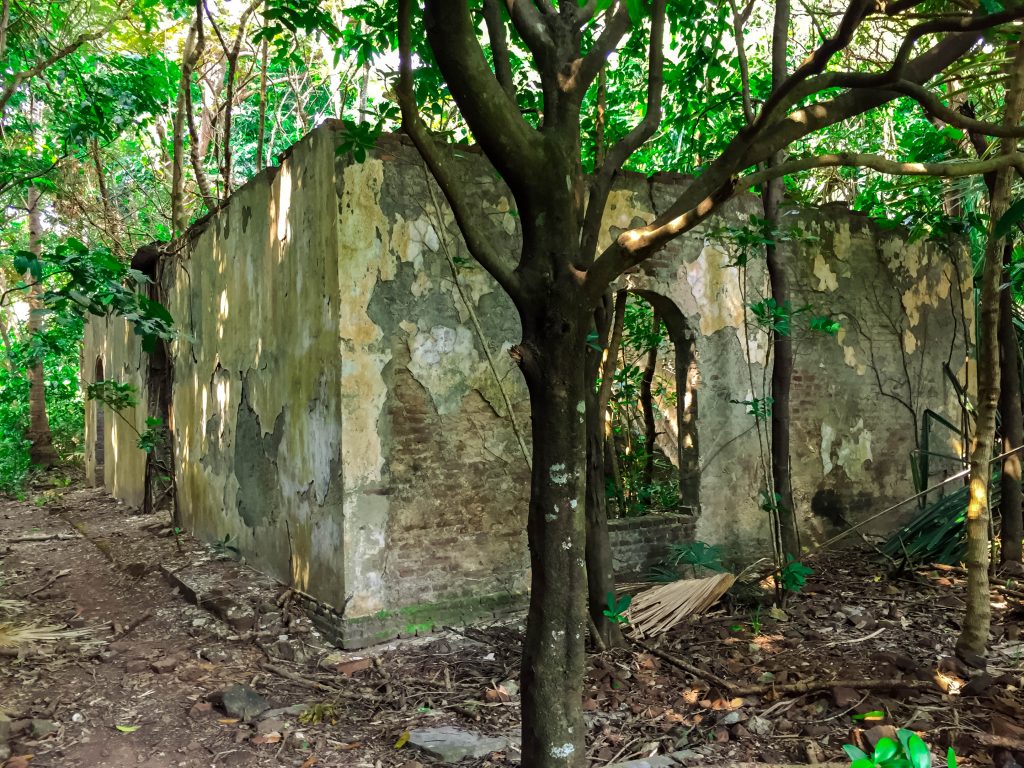